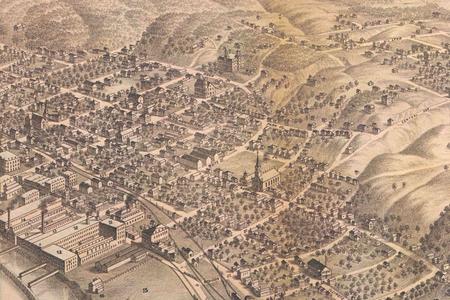 The yet unnamed Moline was platted in 1843 by David B. Sears, Spencer White, Joel and Huntington Wells, Charles Atkinson, and Nathan Bass. The county surveyor drew two maps, one with the name Hesperia (Star of the West) and the other with the word Moline (from the French Moulin meaning Mill Town). When its founders were asked what the name of the town would be, Charles Atkinson is attributed as saying "Moline, let it be called." This plat was acknowledged on June 6, 1843, but as a fire destroyed the original documents, Moline was not legally incorporated until the spring of 1848.

Moline boasted thirteen buildings in 1843. By 1848 about 1,000 people lived in Moline, and in February 1854 the railroad first came to town. Moline was reincorporated in 1855, and in April 1872 was incorporated as a city, electing Daniel L. Wheelock its first mayor. John Deere was elected the city's second mayor in 1873.

Learn more about historic preservation in Moline from the Historic Preservation Commission.